An observation I have of the city of Toronto.

I don’t see ‘too many’ instances of obesity among the citizens. Go ahead, thump your chests if you want to …. but there has definitely been an increase of ‘visible’ individuals who now navigate about via ‘mobility vehicles’.

I confess that I first noticed their proliferation when I had the occasion to observe a gentleman (an apparent aging hippie from his attire and appearance) zip by me on his electric-powered scooter.

It was bedecked with hippie-era decals, side-mirrors on the handle-bars, feathers and a dream-catcher reminiscent of Buffy-Saint-Marie , his previously long hair of the hippie-era now a reminder of the mullet popularized by the likes of Billy Ray Cyrus (any wonder some parents were concerned about Miley?

We’re not talking about Sly & The Family Stones-era hippie here. Mama Cass’ gene must have by-passed that particular pool – a few times.

What we are talking about here is the type of In-A-Gadda-Da-Vida hippie riding along the designated bicycle lane with his Bluetooth stereo speakers blaring Stephen Wolf’s – Born To Be Wild. This was a post-hippie specimen who had (apparently) survived the CIA LSD experiments (Project MKUltra) and living La Dolce Vita. 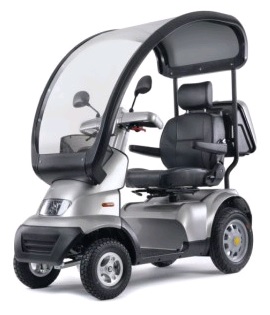 All of this was upstaged when, months later I observed a two-seat mobility-scooter going by. I’m now on the lookout for those with a trailer-hitch. Perhaps a double-decker model is on the designs-board somewhere?.

Perhaps the growth in mobility scooters will spur some newly aggrieved group to agitate for their own designated ‘vehicle-lanes’ to facilitate their travels along the already congested city streets and sidewalks.

I still think ‘moving side-walks‘ would have been the better way to go; and they would have been best placed underground. With little to no pollution and protected from the environmental elements above for metropolises

Of course, the nit-pickers of the world will look for something to nit-pick about.